"The cosmopolitan spirit in literature" 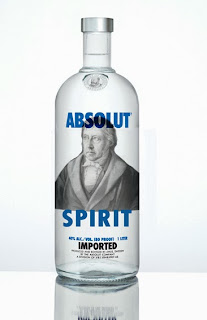 The title of this post refers back to my previous post and to the book of that name by Joseph Texte, the late-19th-century French comparatist. As I wrote in the post, Texte used the concept of the "cosmopolitan spirit in literature" in the sense in which Fritz Strich would later speak of the "supranational" development of a "European spirit" in literature. As Strich wrote, literary commerce  between and among  the various nations of the continent played a leading role in this development. He cited the same cultural manifestations in European cultural history. For instance, Gothic architecture can be found in Germany, France, Italy, England, Spain, and Prague. Similarly Baroque art. Yet, this manifestation began in one place before it was borrowed and transformed by another country. Thus, there is a temporal difference in the appearance of Gothic, Renaissance, Baroque, Classicism, Romanticism, and so on.

For Strich each nation had a specific mission in the development of this "spirit" of Europe, and its contribution "reveal[ed] its own innermost character." E.g., France bequeathed to Europe the rule of reason, "transcending any place, any time," yet "this rational spirit of French literature [was] also a very national spirit." The French classical spirit dominated the arts until Germany found its moment and, with Romanticism, carried other nations before it in breaking the bonds imposed by the regimentation of classicism.

Strich modifies somewhat the "ethnological" aspect of Texte's account of cosmopolitanism, and, in the article from which I have quoted him above, published in 1930, he also problematizes what is exactly meant by "European."

Leslie Stephen, in his lengthy review of Texte's book in volume 4 (1909) of Studies of a Biographer, questions the notion of a "spirit," cosmopolitan or otherwise. He agrees that there has been, since the 17th century, a "tacit freemasonry between the higher classes" and that the "cosmopolitan spirit was the product of the innumerable causes which were bringing nations into closer intercourse at their higher levels." He argues, however, that it was not Rousseau, but Voltaire, who proclaimed the new alliance between the French and English "mind." His achievement was to acquaint the French with the philosophy and science of the Englishmen Locke and Newton. But philosophy and mathematics, as Stephen writes, are not especially English. Nevertheless, Voltaire concluded that Britons were philosophers because they were "free" men, resolved "to think as they pleased and to say what they thought." But freedom is not necessarily in the particular "character" of any nation, even the English. In fact, only a generation earlier the French had considered the English more savage "than its own mastiffs" for killing its king.

In the end, Voltaire remained true to his French roots and to the Academy. The classical rules in art, according to Stephen, did not allow literary expression of the deepest subjects; that was the realm of religion. What Rousseau got from Richardson was the legitimacy for expressing sentiments directly. By introducing "enthusiasm" into French letters, however, Rousseau was engaging in genuine revolt against the established order, unlike Richardson, whose "frank utterance of common sentiments and freedom in dealing with common subjects" was not revolutionary in a country that had never possessed an Academy in the true sense. 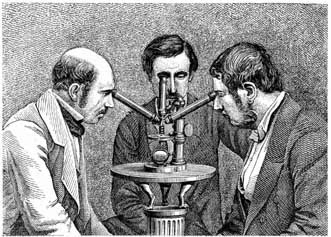 In conclusion, Stephen criticizes what he calls this "scientific" approach to literature, the search for causes in the development of literary and artistic phenomena. Critics are always trying to trace origins, for instance, of "romanticism" and so on, and then speak

as though its first representative had made a discovery of a new product as a chemist discovers a gas which nobody had ever before perceived. Rousseau, or somebody else, has then the credit of all the subsequent developments, as Watt gets the credit of the steam engine. Each new critic pushes the origin a little further back, because in reality there is no origin but only a gradual change of form.

I am jumping back into world literature, after so much time away in the realm of utopia, especially as I am scheduled to give a paper on it on January 11 at the MLA in Chicago. In truth, utopia and world literature are not that far apart in the realm of ideas: both are proposals to create more harmony  and decrease animosities among peoples. Utopia, however, would halt the process of change, while world literature is about change and communication. It decidedly is not, as David Damrosch contends in , about great works of literature, those that have "an exceptional ability to transcend the boundaries of the culture that produces it." Thus, Homer and Sophocles, alongside the Kalidasa and The Tale of the Genji in "world literature" surveys.  Goethe's comments on world literature are not copious, but in none of them does he designate a particular work as a work of world literature.

A term that crops up frequently in my research in this connection is "cosmopolitanism." A couple of days ago I was taken aback when I came across a book from 1899 entitled Rousseau and the Cosmopolitan Spirit in Literature. This concept is not one I associate with Rousseau, and in fact I wrote a post on this subject earlier this year. Rousseau, as I wrote, loathed the very idea of cosmopolitanism, asserting that Germans, French, English, and so on all had the same taste and manners: they had become "Europeans." 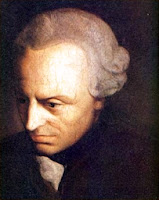 The book, as I discovered, uses "cosmopolitan" in a different sense. It is by Joseph Texte, who was a professor of comparative literature at Lyon. For Texte, the "cosmopolitan spirit in literature" was the result of the embrace of the English canons of art by Jean-Jacques Rousseau. La nouvelle Heloise  abandoned the normative classical ideals of the French Academy and introduced the more "barbarian" (in the view of the French) values of English literature, especially as seen in the homely, realist conventions of Samuel Richardson's novels.  This opened the floodgates to the reception of the "Nordic" spirit: The new content entering French literature by the 19th century was that of imagination and sensibility," definitely not a French product; they were of a northern cast and infused, as Madame de Staël expressed it, with "foreign vigour." The French developed an appetite for the foreign as a consequence of exposure to "northern" writers.


Texte defends his use of such racial categories. Since Taine, "the successor of Madame de Stael," the study of literature has become an "ethnological problem." What, after all, he asks, is an individual without his environment? "Dante without Italy? Could the works written in Latin be attributed to the Arabians or Chinese? Could the Alhambra be the work of the architect of the Parthenon? Each nation utters a portion of the 'interminable discourse' (Vigny) delivered by humanity." The discourse, he says, is interminable, but the nations have been participating in it for only a few centuries. He goes on to write something that is very redolent of Fritz Strich:

"'For the past eight or ten centuries there has been, in a sense, a traffic or interchange of ideas from one end of Europe to the other, so that Germany has been nourishing itself upon French thought, England upon German thought, Spain upon Italian thought, and each of these nations successively upon the thought of all the rest."

Since my current work concerns the origins of Fritz Strich's views on Goethe and world literature, this book by Texte would seem to be part of these origins. Texte in his introduction thanks as his mentor Ferdinand Brunetière, whom I have already alluded to in an earlier presentation on this subject: In a long article in 1900,  Brunetière sketched the development of what he called "European literature," in particular the way in which the individual nations had developed a European literature on the soil of medieval Christianity and in particular antiquity, which he called "the master of Europe's mind and spirit." The great literatures of Europe developed successively (there are five: first, the Italians, followed by the Spanish, then the French, the English, and finally the Germans), with one after another manifesting "what were its most national and particular aspects," and each literature contributing to "the movement of European thought."

Posted by Goethe Girl at 7:23 PM No comments:

My immersion in the philosophes and the 18th century, in preparation for the conference on utopia in British Columbia, was so intense that I found it difficult to concentrate on any one aspect to post a blog about. Turgot, Condorcet, Diderot were racing around in my head. Having returned from the Pacific Northwest, however, I find it high time that I make an attempt to write regularly. But, first, some views of the conference. 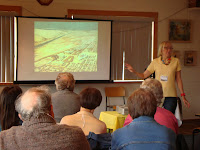 That is me, dispensing jewels of wisdom to the audience. It was not an academic gathering, but instead drew many individuals from the Northwest and further afield who traveled with some difficulty to hear seven people talk about utopia. Sointula is on Malcolm Island, which in turn is off the coast of Vancouver Island, and it was via two planes and a ferry that I reached it. (The map of Vancouver Island above shows Sointula in the far upper-left corner, so you can see that it was not quite a direct flight from the Northeast.) The population is small (about 700), but the conference was organized and run by the most impressive corps of volunteers that the paid staff of the MLA could not match. I was very impressed with the attendees, all of whom showed a thirst to learn about the Sointula adventure (read more at that link) and about utopia, past and present.

Among the speakers was Chuck LeWarne, from whose books on Puget Sound and Washington state utopias I have learned much. In the corner of utopian settlement he has explored, he has shown how America has been a place of constant re-invention (see, for instance, this book by Chuck), something the 18th-century philosophes could hardly have imagined. Anyone who has read my posts on world literature will know why I think this is the case: capitalism and the free market seem to encourage people to constant novelty. In my last post I mentioned that Turgot had found novelty to be the basic human passion, one that impelled the innovators of history to break out of the rut of tradition and custom and propel humankind on its path to perfection. For Turgot and for many 18th-century philosophes, this passion was not envisioned in "embodied" terms, for instance, in the rise of fashion or the importation of new products to France, such as tea and coffee. It was an intellectual construct, like Reason.

Since my essay on Bodmer appeared (Goethe Yearbook, vol. 20), I have been struck by something that I only treated in passing in that essay, namely, the concept of novelty or "das Neue." Joseph Addison had included novelty in his analysis of the sublime, but Bodmer rejected it in that connection because novelty was concerned with the ephemeral and not, as as did the beautiful and the great in nature, with essential aspects of human nature. I use the latter term in full realization that its existence is now objected to in some quarters. Novelty is of course the deity that presides over the modern, no-holds-barred market. Before the 19th century utopia was limited to intellectual speculation, to literary works, but global trade and commerce allowed people to see themselves in a new light. Thus, the emigration to the Americas in that century of people wanting to create a "new" life.

Posted by Goethe Girl at 1:32 PM No comments: