Europe and the world

The term "world literature," however, was already a buzzword by the end of the 19th century, but usually in the context of comparative literature or in reference to the great books of "the world" or to the circulation of books beyond their country of origin. The world literature publishing industry, as represented by anthologies and college textbooks, has likewise left the Goethean context far behind. The focus continues to be the "great books of the world," of all times and places. Thus, the Norton Anthology of World Literature includes (in volume 3), among others, the writings of Martin Luther, John Milton, The Life of Lazarillo de Tormes, and "Indian Poetry after Islam." This is very sloppy intellectual work. In Goethe's conception, world literature concerned the active and continuous exchange of and encounter with living literary works of other nations. They were something like news in a bottle that had been cast in the ocean and turned up on another shore, bringing us information about the ways and folksways of other peoples. The distinction between then and now, however, is that when one read books of other cultures in translation, we understood that they had once been in a particular native language, which, as John Noyes has written, also conveys a particular cultural history.


But what if no written cultural history exists in your native language, say, if you grow up in the those parts of the world that, until recently, had no written language? If you want to enter the public sphere as a writer, today most likely you will learn to express yourself in a so-called "world language": English, Arabic, Chinese, French, or Spanish. To what extent do these language, as powerful and as extensive as they are, continue to express a cultural history? Historically and concurrently, the most privileged writers in this respect have certainly been European ones. In Goethe's time, they wrote in their native languages, transmitting a cultural history of "Europe," which forms the basis of what is called and often criticized as the humanities. Moreover, European writers still enjoy large “native” publics and, therefore, continue to write in their own languages: Italian, Danish, Hungarian, Polish, and so on.

The interest of Strich in this respect was his focus on national difference and national language, which was not quite Goethe's focus. Indeed, Goethe was turned toward the world, but his world was mostly a European one. As Strich wrote, already in an essay in 1930 on world literature, Europe is not the world.

Images: Clker art; Pinterest
Posted by Goethe Girl at 10:57 AM No comments: 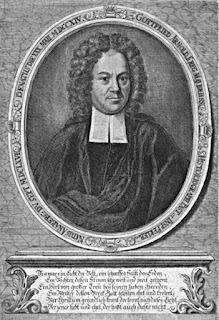 Gottfried Arnold: I bet that's a name you haven't heard in a long time. How about Unparteyische Kirchen- und Ketzer-historie (“Impartial History of the Church and of Heresy”), published in Frankfurt in 1699–1700? The two hefty volumes, consisting of 2,300 double-column folio pages, was a comprehensive work on varieties of religious heresy, going back to Apostolic times, and was written when, it might be said, there were fewer heresies than now. Anyone who has studied Goethe's early years and works -- before he went off to Weimar -- will have come across Arnold's name and work. Somehow the title sticks in your mind, even if you haven't looked into the subject. Goethe seems, like many a young person, to have experienced religious scruples. At a certain stage, he was also in the company of Pietists, who were in many ways anti-ecclesiastical. As I have discovered, he was quite taken with Arnold's volumes, which seem to have stood in his father's library.

It came about this way. For a long time now I have been trying to thin out my large collection of books, which includes a number of issues of Horizon magazine, which was published by American Heritage from 1959 to 1989. Compared to today's arts and letters coverage (e.g., that of the New York Times), Horizon was a quite a distinguished venture, with really excellent writing. Going through my copies for a final time, I found in the Spring 1964 issue an essay entitled "Four Faces of Heresy" by H.R. Trevor-Roper. Yes, that historian, writing in comprehensible English for what was not an academic publication.

Trevor-Roper's light tone on a weighty subject is present at the start: "An account of religious heresy in a single essay!" And then he moves on to the heavy stuff: "Only once in history, to my knowledge has so vast a subject been comprehended in one work, and that was published by the Lutheran pietest priest Gottfried Arnold in 1699." Trevor-Roper goes on to indicate that the work was not well received by the religious establishment, with Arnold being accused of being an "impertinent disturber of the peace of the Church." The reason: "Arnold, on the whole, took the side of the heretics."

As I have mentioned on this blog on numerous occasions, Goethe turns up everywhere. And there he was, at the start of the second paragraph of Trevor-Roper's essay: "But Goethe (and who would not wish to be on the same side as Goethe?) thought differently. When Arnold's book fell into his hands, he was enchanted by it. It had, he wrote, a great influence on him. Now he saw the heretics of history in a new light. 'I had often heard it said,' he wrote, 'that every man came in the end to have his own religion, and now it seemed to me the most natural thing in the world that I should devise my own; which I did with great comfort ...'"

The quotation here is from book 8 of Goethe's autobiography, Poetry and Truth (Dichtung und Wahrheit), written many, many decades after the years in which he was involved with the Pietists. After reading this, I went through Der Junge Goethe, the five-volume edition of his pre-Weimar writings, but could find no direct mention by Goethe himself regarding Arnold's work from his youthful period. Still, even if Goethe did a lot of research when writing his autobiography, he had an excellent memory.

The essay by Trevor-Roper is worth a read. (And American Heritage is now attempting to digitize past issues of Horizon, if one would wish to contribute to a worthwhile endeavor.)  Heresies fall into four categories: puritan, messianic, mystical, and rational. Trevor-Roper makes the point that it was in the economically advanced areas of Europe that the Protestant Reformation emerged. Later, it was those from the non-established Church, Quakers and Baptists, who made the industrial revolution in England, while the Pietists of Saxony began the industrialization of eastern Germany. What some would have called heresy then was for others intellectual speculation. And, yet, while "heretical" thinking allowed science to progress and led to religious toleration, heretics have done nothing for art. So, writes Trevor-Roper:

"The wealth and patronage which spends itself in art has always been at the disposal of the established church, not of its persecuted critics, and this economic fact has often become a moral attitude: heresy, which is essentially intellectual, disdains appeals to the senses. Moreover, the puritan spirit, which is so powerful in heresy, is positively opposed to art. ... The artistic product of two thousand years of heresy is nil."

It is hard to imagine that the current moment is one that hates the senses, but currently approved sexual attitudes certainly lack a spiritual element. Perhaps that lack of spirituality contributes to much of the anti-art with which we are surrounded today. I wonder what Goethe would think of it all.