Erich Auerbach on Goethe and realism

Edward Mendelson, in the first of his three talks at Columbia University on Virginia Woolf's novel Mrs. Dalloway, mentioned  Erich Auerbach’s Mimesis chapter on Woolf's novel To the Lighthouse. I took a look at that chapter, which is entitled “The Brown Stocking” (“Der braune Strumpf” in the German version). As is typical with Auerbach, it is an astonishing close reading of a small episode in Woolf’s novel. There is what Auerbach calls an “exterior occurrence,” which he calls “entirely insignificant” in itself — Mrs. Ramsay is measuring a sock on her son James who will not stand still — while the rest of the episode is devoted almost entirely to “inner processes,” movements in the consciousness of Mrs. Ramsay. If you have read Woolf’s novels, you will know about the role that such parentheses play in Woolf’s storytelling, which don’t move the story “forward” much -- action is not the point -- but instead paint the world through a series of changing impressions, all rendered via a point of view. “The Brown Stocking” is the last chapter in Mimesis.

The English-language copy of Mimesis that I own has been in my possession since I was in graduate school at the University of Texas eons ago. Back when I bought the book, I was not so wrapped up with Goethe and noted that the only German text treated by Auerbach was  Schiller’s Kabale und Liebe. After reading the chapter on To the Lighthouse, however, I consulted the index and discovered that Auerbach had some comments on Goethe in two long sections of earlier chapters. One is in the chapter on Shakespeare and deals with the mixing of styles in Germany in the 18th century; the other is in the Schiller chapter. What he said about Goethe interested me so much that when I went to hear Edward Mendelson last evening I stopped at the Columbia library and checked out the German version for comparison.

Auerbach’s subject, as per the subtitle, is the representation of reality in Western literature (in German: Dargestellte Wirklichkeit in der Abendländischen Literatur). It begins with the famous chapter entitled “The Scar of Odysseus” (Die Narbe des Odysseus), although the true focus is the superiority of the Biblical account of Abraham’s sacrifice of Isaac in the representation of earthly reality. In the Schiller chapter, Auerbach elucidates why Germany in the 18th century, despite its overthrowing of French normative poetics, especially as expressed in the earthy depictions of domestic life by Sturm und Drang dramatists, did not evolve a full-fledged realism showing the interaction of the dynamic forces of history with the lives of individuals. Such an interaction was the subject of Schiller’s drama, but Schiller, especially in depicting his villains as out-and-out scoundrels, depriving them of “their inner essence” (ihres inneren Wesens beraubt), resulted not in a realist drama, but melodrama — and propaganda (sehr wohl geeignet, eine starke, gefühlsmäßige politische Wirkung auszulösen). And that was basically where realism in the depiction of contemporary subjects ended. 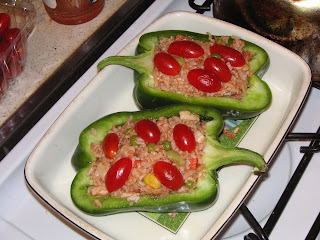 Goethe, Auerbach contends, endowed as he was with “so much natural talent for grasping the sensory and real” (weil kein anderer Schriftsteller so viel natürliche Anlage zum Ergreifen des Sinnlichen und Wirklichen mitbrachte)— as seen in his early works — might have led the way, but such realism as exists in his later works was applied in a very narrow domain, e.g., in portions of Wilhelm Meisters Lehrjahre. The “contemporary shuffling of social strata” finds no expression in Goethe. Auerbach writes: Goethe, "the burgher’s son in a class-conscious social order” (der Bürgerssohn aus der ständischen Gesllschaftsordnung) was instead “irresistibly inclined toward harmonious development of his own nature. … He, too, like Wilhelm Meister, sought his own particular way out of his bourgeois class, without concerning himself with whether and how the constitution of society might one day change.” Despite his father’s mistrust, he went to Weimar, where, “within the narrowest frame, [he] created for himself a universal position which was perfectly suited to him.” (For German, see p. 396 of the original.)

These comments helped me in my understanding of Elective Affinities. The “immobility of the social background” in this novel is even stronger than in the Wilhelm Meister novel. In a sense, it might be said that the characters resemble the Homeric ones treated in the first chapter of Mimesis, who, in Auerbach’s memorable phrasing, “wake every morning as if it were the first day of their lives.” Change was something that Goethe came to dislike, especially violent, disorderly change, and he simply turned his back on it. A passage in the appendix to his translation of Cellini indicates that Goethe believed that it was only in the flowering of aristocratic cultures that significant individuals could develop unimpeded. The result: “We are left with the conclusion that Goethe never represented the reality of contemporary life dynamically, as the germ of developments in process and in the future.” (Als Ergebnis bleibt, daß Goethe die Wirlichkeit des ihm zeitgenössischen gesellschaftlichen Lebens niemals dynamisch, niemals als Keim werdender und zukünftiger Gestaltungen dargestellt hat.)

(Re the photos here: for some reason Google is not allowing me to import pictures from the internet, even from the Goethezeitportal. Thus, the ones here show the present reality of my life.)
Posted by Goethe Girl at 4:02 PM No comments:

Beauty is in the details

My friend Philippe is visiting from Germany and was in town yesterday, so we went to the Metropolitan Museum (where else?). The 19th-century European painting galleries held lots of surprises for me, in the sense that the Met constantly changes out paintings from its vast storage facilities. Yesterday, there was a whole room of paintings by Pissaro that I had never encountered and, with a larger number of works to consider, offered new insights into this period.

Lately I find myself consumed by the details in works of art. Herewith some examples from yesterday's tour. (Click on image to enlarge.)


This last detail is from a painting by Pierre Puvis de Chavannes, whose paintings are exhibited in the long hall in which the Met's ample supply of Rodin sculptures is located. Like Pisarro, his work is also one I had often passed by without looking closely, but the beauty is certainly in the details. 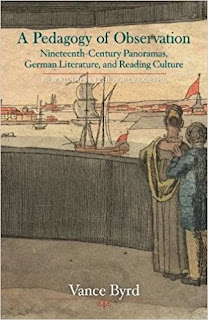 Vance Byrd, professor in the German department at Grinnell College, was at the recent Atkins Conference of the GSNA. Vance and I were on a panel together at the previous conference three years ago, at which he gave a talk entitled "A Domestic Spectacle: Breysig's German Panorama and Bertuch's Modejournal." Breysig referred to the painter Johann Adam Breysig, who considered himself to be the inaugurator of the medium of panoramic views. Friedrich Justin Bertuch was the successful Weimar publisher and entrepreneur whose Journal des Luxus und der Moden brought panoramas -- and much else that was of consumer interest -- to the attention of the German reading public in the 1780s and 1790s. 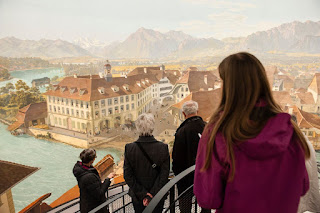 The panel three years ago was the first act of Vance's project, which has now reached completion in a book entitled A Pedagogy of Observation: Nineteenth-Century Panoramas, German Literature, and Reading Culture (Bucknell UP, 2017), which is now available from Amazon. The cover is a detail from a painting of 1830 entitled The Panorama by the painter C.G.H. Geißler.

Vance kindly sent me some images of the oldest extant cyclorama, representing the town of Thun and the mountains of the Bernese Oberland in Switzerland, which was created in the years 1800-1814 by Marquard Wochar. According to the website of the Thun Kunstmuseum, the panorama (280 square meters) has undergone two restorations, the most recent by Michael Fischer, son of the first restorer in 1899. (Go to the museum's website for more pictures and documentation.) In the 1960s a rotunda was built for observing the panorama. In the photo above, you can see the illusionistic effect provided by the platform. (As usual, click on images to enlarge.)

Vance's argument is that most people did not have the opportunity to view these magnificent paintings, but instead received their knowledge of them from publications like that of Bertuch. As Vance writes, "By reading about what editors, newspaper correspondents, and writers referred to as 'panoramas,' curious Germans learned about a new representational medium and a new way to organize and produce knowledge about the scenes on display, even if they had never seen these marvels in person." In this way, they were led to witness, if at second hand, industrial transformations, urban development, scientific exploration, and so on. 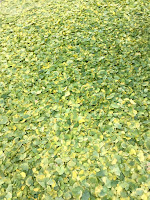 The weather has turned to freezing overnight, and when I went out for a walk this morning there were fields of gingko. (Click on photos to enlarge.) Herewith a translation (from Wikipedia) of Goethe's poem "Ginkgo biloba":

This tree’s leaf, that from the East,
Has been entrusted to my garden,
Gives to savor secret sense,
As pleasing the initiate.

Is it one living creature,
Which separated in itself?
Are they two, who choose themselves,
To be recognized as one?

Such query to reciprocate,
I surely found the proper use,
Do not you feel it in my songs,
That I am one and double? 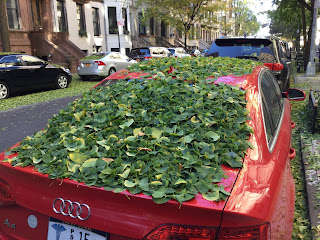 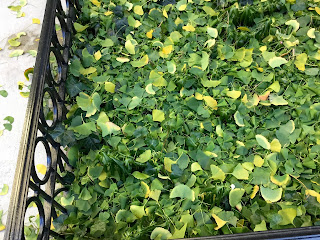 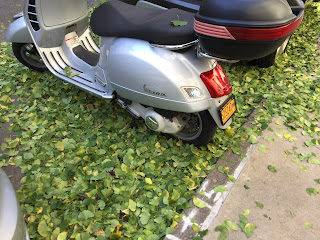 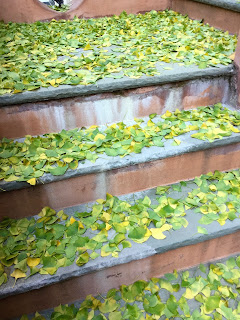 Even my begonias in the outside planter faded overnight. 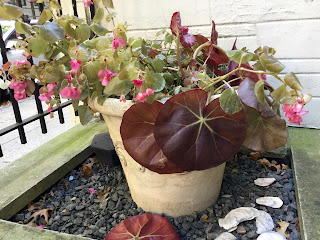 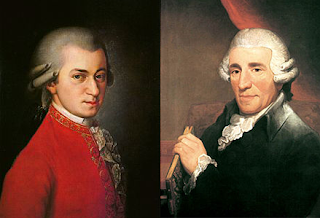 I returned two days ago from Pennsylvania State University in eastern Pennsylvania, the site of the Atkins Conference of the Goethe Society of North America. There were two days of panels on the subject of "reorientations of Goethe." In this connection I did a presentation on my activities as a Goethe blogger, offering statistics about viewership. Since Goethe comes up in all sorts of contexts, the posts on this blog have been far-reaching. I provided a handout at the presentation that listed the titles of some of the posts with the highest viewership. If anyone is interested, contact me, and I will send you the list. 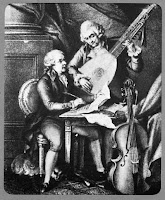 But, to return to the appearance of Goethe in all kinds of contexts, last evening I went to a performance by the Brentano String Quartet of Haydn's Opus 64, no. 2, and of Mozart's "Dissonance" quartet. The evening was billed as one of "superb musicianship" and "conversation." The latter concerned the introduction by Professor Scott Burnham, who began his comments by saying that, according to Goethe, a string quartet was a conversation among friends. So, there you have it. Goethe again. Burnham also mentioned that Mozart and Haydn had played quartets together, sharing the first and second viola. One can only imagine. All that was missing was the presence of Goethe.

The Brentano String Quartet, by the way, takes its name from Antonie Brentano, who, according to the program, is believed to be the intended recipient of his famous love confession, "Immortal Beloved."