Global Goethe is a site recently inaugurated by the Goethe Society of North America to serve (as per the website) "not just as a repository of translations, adaptations, performances, and visualizations of Goethe and his works from around the world, but also as a place for collaborative scholarship that examines the many representations of Goethe across languages and cultures." One of its first features concerned a Korean company, Lotte Co. Ltd., which was founded in 1948 by the South Korean businessman Shin Kyuk-Ho, who had a fondness for Goethe's novel The Sorrows of Young Werther. (Go here for Global Goethe's first post on the Lotte company.)

Lotte is a major manufacturer of sweets, and its corporate message, "Sweetheart in Your Mouth," is resonant in connection with Charlotte. According to a Wall Street Journal article of April 17 (behind a paywall) on the Lotte company, the founder was struck by the intensity of the passion Werther felt for Lotte. In the words of one of Lotte's directors: "We want Lotte to be beloved by everyone, like Lotte was."

This link to the Lotte group indicates that the company is much larger than chocolates. It is involved in the chemical and construction industries, and there are baseball teams bearing Lotte's name, in Korea and in Japan, not to forget a chain of luxury hotels around the world. According to the WSJ article, a copy of Goethe's novel is placed in each room of the hotels. The 123-floor Lotte World Tower in Seoul boasts a 17-foot statue of Goethe, a replica of the marble one in Berlin's Tiergarten. 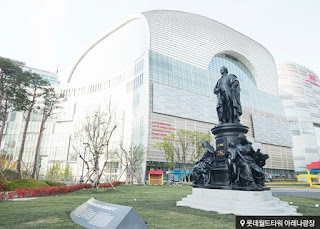 As soon as I read that there was also a two-story-tall illuminated gold-hued statue of Lotte at the Lotte Department Store in downtown Seoul, I got in touch with the New York City publicist for the Lotte Group, asking if she could obtain a photo of the statue for me. After weeks of back and forth emails, a photo arrived today, for which I am most grateful. The statue, pictured at the top of this post (click to enlarge), is located on the rooftop park of the department store. I think this statue of Lotte must be a first.

Also posted here is the photo of the statue of Goethe, situated in Arena Square of Lotte World Tower in Seoul, which was also sent to me by the Lotte publicist. I wonder how many Goethe statues there are around the world, erected because someone felt a passionate attachment to Goethe's work. I would be interested in hearing from anyone (with photos, please) concerning Goethe statues worldwide. With thanks for this first installment from the Seoul and New York City representatives of Lotte.
Posted by Goethe Girl at 8:09 PM