I am not sure why it has taken me so long to get around to watching the 2005 film version of Pride and Prejudice. It may have been Keira Knightly in the role of Elizabeth Bennet, but having finally seen the movie I find that I was unduly prejudiced against her. She is excellent. The family setting at Longbourn also adds much charm to this version, serving as a strong contrast to the formal, rigid world of the landed gentry and aristocracy.

One knows that Jane Austen was familiar with Goethe's The Sorrows of Young Werther, as that work is mentioned in the epistolary "juvenilia" Love and Friendship, but after watching this 2005 version of Pride and Prejudice I could not help thinking that she might have been familiar with Goethe's Hermann und Dorothea. One might make the case that the restricted settings of Austen's novels are reminiscent of the village in which Goethe's places his idyll. The restricted number of characters in Hermann und Dorothea -- six -- also hews closely to that of Austen's Emma, which even includes a pharmacist! While the French Revolution is clearly an impetus for Goethe's vision in his small epic, it is only in Mansfield Park and in Persuasion that Austen allows hints of an outside world lurking to wreak destruction of settled and contented ways of life.

Peter Hume-Brown in his biography of Goethe writes the following about Hermann und Dorothea: "The personages in the poem are all recognized types of the classes to which they belong, have precisely the traits which can be understood and appreciated by the general mind. There is here no subtle psychology as in Tasso and Iphigenie, no abnormal character like Werther which appeals only to artificial natures." I like that part about "no subtle psychology." Neither Austen nor Goethe idealizes the inhabitants of the their tales, but present them for the most part in their most pleasing incarnation. 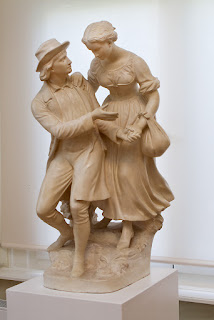 But Pride and Prejudice shares something important with Hermann und Dorothea: the two male principles fall in love at first sight. It is also suggested, by the cutaways of the first visual "encounter" between Elizabeth and Mr. Darcy, that Elizabeth Bennet is likewise smitten. She, however, is not a worldly person, and it takes her longer to come to the realization that she has probably been in love with him from the first. As for Dorothea, who seems very wise and, not surprisingly, has more reason to be cautious, here is what she says about Hermann:

Whenever Elizabeth looks at Darcy, her eyes show that she is in love, even at the moment when she has told him he is the last man living she would ever marry.

Both novels also concern marriage to someone who is initially not thought as "suitable." Something like impropriety exists between their circumstances. In Hermann's case, his father wants him to marry a woman with a dowry, but once Hermann sees Dorothea he insists he will not marry at all if he cannot have her. Mr. Darcy seems to be of the same persuasion and must only convince himself to set aside his objections to her family. Ultimately, love conquers all.